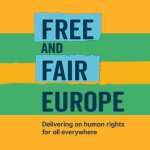 The ‘Free and Fair Europe’ campaign supported by the Human Rights and Democracy Network has reached 400 signatures from 25 countries. The campaign asks candidates in the European Elections to uphold the founding values of the European Union: respect for human dignity, freedom, democracy, equality, the rule of law and respect for human rights. You can read more on the campaign website https://freeandfaireurope.eu or on Twitter.